(QNO) - Maire MCCainn, an Australian woman whose Vietnamese name is Mai, has been working as a philanthropist in Hoi An city (Quang Nam province), helping local children with hearing impairment.

In 2006, Maire MCCainn left Australia for Vietnam, volunteering as a nurse in Hoi An for 3 months.

During the time working there, she found a lot of children with hearing impairment without receiving any schooling.

At that time, Maire MCCainn thought she should help these children so that they could have a better life in the future. It’s the reason she’s been living in Hoi An for 14 years and doesn’t want to leave.

Maire MCCainn now runs a school for children with hearing impairment in Hoi An city named “Hearing and Beyond in Vietnam- Educating Deaf and Hard of Hearing Children”, which was founded 10 years ago.

She said that her life now belongs to Hoi An and she doesn’t want to return to the Western world though she loves and misses her family and friends.

The children in Hearing and Beyond in Vietnam- Educating Deaf and Hard of Hearing Children school are all deaf or hard of hearing.

They are from poor families and have no chance to attend any schools, hence, having difficulty communicating with others.

A lot of them become depressed while their physical and mental health is good. So, they need the help.

Despite receiving some financial help from her friends in Australia, Maire MCCainn has to return to Australia annually in order to work as a nurse to get money to maintain the school in Hoi An.

Currently, there are 24 children at the ages between preschool and secondary school being provided with general and vocational education at the school.

Maire MCCainn loves the children and feels happy when they become mature and self-confident in social communication.

She takes care of and plays with them as much as possible. Maire MCCainn remembers all the children’s names and personality.

The children love her, too. So, Maire MCCainn doesn’t think she will leave Hoi An. She said she belongs to Hoi An.

Hoi An: a picturesque car-free city

(QNO) - Hoi An ancient town (Quang Nam province) has just been listed among top 10 most picturesque destinations in the world which are free of cars and motorbikes by the Australian travel website Traveller. 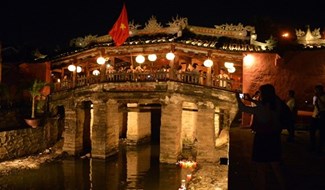 (QNO) - Hoi An is the 8th cheapest tourist attraction of 46 tourist destinations in the world according to Holiday Money Report 2021 from Post Office.