(QNO) - Besides a system of unique structures, My Son Sanctuary is famous for a large number of precious artistic sculptures which show the prosperity of the ancient Kingdom of Champa.

The linga-yoni was found at Tower A10 of My Son Sanctuary in 2020 when the project on conservation and restoration of Towers A was carried out. It is being submitted for recognition of national treasure.

Earlier, Ekamukhalinga (a linga with the face of Shiva) was excavated in 2012 and becomes a national treasure of Vietnam.

Till now, there have been a lot of artefacts with high artistic and aesthetic values unearthed in My Son Sanctuary, such as sacred goose Hamsa, animal heads, lion statues, steles, peaks of towers among others.

My Son E1 altar and Ganesha statue were excavated in early 1900s by the French, and Ekamukhalinga was recognized as a national treasure in in January 2015.

The linga-yoni found at Tower A10 is believed the unique artefact with high artistic and technical values.

Particularly, its metal pin along with a set of gold ornaments excavated at Tower C7 in 1902 by the French are evidence for a mystery of artefacts made of precious metals in My Son.

According to researchers, it may be inferred from what have found (artefacts, steles with words) that there are still a lot of valuable things for discovery in My Son Sanctuary.

By the early 20th century, My Son Sanctuary was reported to consist of about 70 temples and towers dating from the 7th to 13th centuries. However, there are about 30 now but most of them are ruined.

Therefore, several projects on its conservation and restoration have been implemented not only to preserve the heritage but also to uncover the mysterious treasure there. 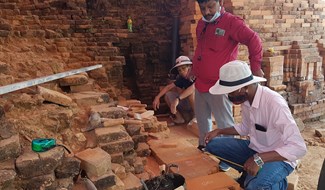 (QNO) - The Indian Embassy in Hanoi has just sent a diplomatic note of My Son Sanctuary restoration to the Quang Nam provincial People’s Committee.

The landscape park of My Son is set up to preserve and develop the natural landscapes and ecosystem, historical and cultural values in this area.