Dr. Nguyen Trong Hieu, a senior lecturer in the solar cell major at the Australia National University (ANU), has been honoured with a science-technology prize in the field of new material technology.

In an interview with the Vietnam News Agency’s correspondent in Sydney, Hieu, born in 1988, said he is happy to be among 10 outstanding young talents of Vietnam receiving the award.

He expressed his hope that the award and similar ones will inspire students, aspiring engineers and scientists at home and abroad so that they will further contribute to the scientific and technological development of Vietnam and the world.

Since 2016, his team has received a total of US$6.4 million in sponsorship for their research. 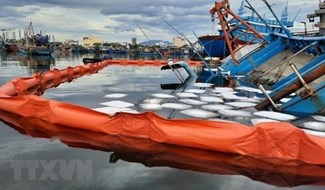 Hanoi (VNA) - A seminar on marine pollution control was held in both in-person and online forms on November 30 by the Diplomatic Academy of Vietnam (DAV) and the Embassy of France in Hanoi.